· Registered
Joined Dec 30, 2021
·
401 Posts
I decided to fix up my Cub Cadet 680 because I need a tractor to drag junk mowers and stuff and a lawn tractor just won't cut it. And my old Bush Hog's transmission went out so it might be a long time before it's fixed. I hate the way the Kohler K301 without balance gears vibrates, and it doesn't run very well anyway. My uncle has a late 90s or 2000s Cub Cadet with a Vanguard V-twin in it. It's just sitting around so I'm going to ask if he will sell it to me. The 680's hydro is leaking oil from a check valve so I've got to fix that (Seperate thread).

I got a pair of free ATV tires that I mounted on the back today. They seem to be in good shape. Lord willing they will continue to

KennyP said:
Didn't know that model even existed. Guess it be MTD built made the difference.
Click to expand...

EricFromPa said:
CCC built. They used alot of leftover IH built parts and IH tooling to make those. Does it have the cast iron center section like my CCC built 782?

Those relief valves require machining to rebuild. You have to carefully machine the small end off on a lathe and replace the O-Rings and springs and Oring backer if it has gotten brittle and cracked. And then weld it back on and reshape it on a lathe. I seen a thread years ago that someone had rebuilt a set at home on a small lathe. He cut the tip off and threaded it and made a new threaded tip and used red loctite to secure it in place. I think it was on one onlycubcadets.net but it might have been on the old IHcubcadet site that got whipped and revamped a few years ago.

Once you rebuild or replace 1 the other one will start leaking as well. One on my 1541 was leaking when I got it and I replaced it with a good used one. I took the other one out and cleaned it and it was good for about 2 weeks and then the tactor abruptly stopped moving forward. It wasn't leaking fluid so I think 1 of the springs had broken or collapsed. It lost all forward momentum because it was basically stuck in Bypass. I replaced it with another good used one and got it moving again but it's hard to tell how long they will last.

This is probibly the best option for relief valves even if they are not leaking yet. Send them both in and have them rebuilt with Modern "VITON" o-rings, stainless steel springs (that will not get weak and collapse or break from rust), the Teflon o-ring backer and 1- 7/16" Grade 25 ball bearing. 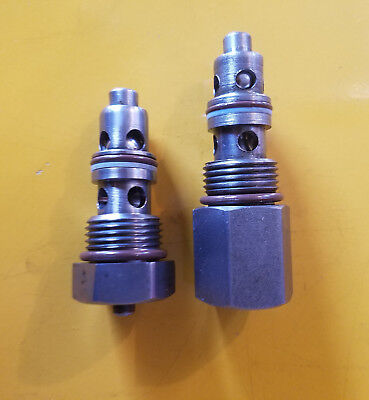 You can now have your automatic or manual relief valves professionally rebuilt by a veteran machinist! If you have extra valves that leak,you can now add value to them buy have us rebuild them. I couldn't be happier.
www.ebay.com
Click to expand...

Thanks so much! Great info!

The axle tubes are aluminum and the center section seems to be aluminum also.
F

· Registered
Joined Dec 30, 2021
·
401 Posts
I got the fender pan pulled off and cleaned the hydro up somewhat. Mower repair buisness seems to be ending for the season by this point so it might be a while before I can get the check valves rebuilt. Definitely going to get them rebuilt though, hydraulic fluid is expensive too.

. Good news is, these tires are still holding up.
F

· Registered
Joined Dec 30, 2021
·
401 Posts
I asked my uncle about his Cub Cadet and he says he already has plans for it. I'll have to look around for a engine somewhere else. If I can find an old Kohler Command (single or twin) I would take that also. However this project could get pretty drawn out...
F

· Registered
Joined Dec 30, 2021
·
401 Posts
I ran the Vanguard with starting fluid today. Needs fuel system work. I pulled it from the generator. Then I pulled the old Kohler from the Cub. I noticed the flywheel adapter on the Kohler looks like it has the same pattern as this: Cub Cadet 3165 16Hp Briggs&Stratton 303447 1279-E1 driveshaft adapter #719-3096 | eBay
Will this work to connect the flywheel to the "second half" of the adapter?
I will have to find another muffler. This one won't work.
F

· Registered
Joined Dec 30, 2021
·
401 Posts
Made a custom exhaust manifold so the muffler clears the frame rail. And put a new starter on the engine. I got a shaft adapter for a 90s Cub Cadet and modified it a bit, so it should work. Dug out a screen for the flywheel and modified it to fit. And broke the little bushing that centers the driveshaft on the flywheel drive. Does anybody know the part number for that bushing?

· Registered
Joined Dec 30, 2021
·
401 Posts
Cleaned and reinstalled the carb. I fit the engine into the tractor today and with some spacers, it fits perfectly. I don't even need to drill new bolt holes. I got my check valves back today and put them in. And I put back on the fender pan.

· Registered
Joined Dec 30, 2021
·
401 Posts
Got the engine bolted in tonight. Lord willing, I can go ahead and start up the tractor tomorrow.
F

· Registered
Joined Dec 30, 2021
·
401 Posts
Started the tractor yesterday. Cleaned the carb like 5 times and it still needs partial choke to run. But it's running better and better. The engine has way more torque than the old Kohler. I'm very pleased. Put 2 old Craftsman battery boxes on it today to serve as tool boxes, dragged a JD lawn tractor out back that I couldn't move with my lawn tractors, and hauled some wood. This tractor is very powerful. All I need now is my new governor springs that are suppos ed to take like
15 days to get here. The current springs work but are very sensitive (generator-spec springs).
1 - 12 of 12 Posts
About this Discussion
14 Replies
3 Participants
Last post:
FrankIII 26 d ago
Garden Tractor Forums
A forum community dedicated to garden tractor owners and enthusiasts. Come join the discussion about performance, modifications, attachments, classifieds, troubleshooting, maintenance, and more!
Full Forum Listing
Explore Our Forums
Off Topic Garden Tractor Forum Bolens Tractor Forum Massey, Snapper, AMF Tractor Forum John Deere Tractor Forum